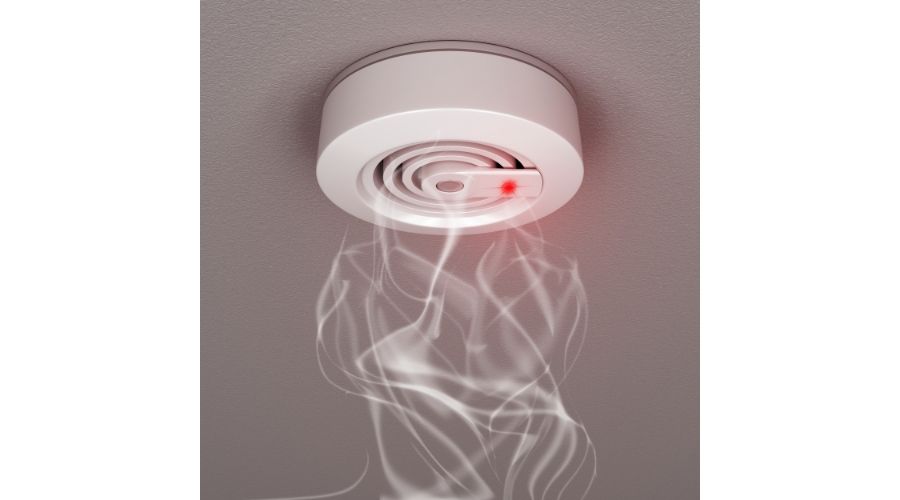 Why is my fire alarm blinking red? Don’t understand, we can help as you most likely need to change the batteries.

Let’s go through the different kinds so that you better understand.

Why Is My Fire Alarm Blinking Red?

There’s not always a clear answer as to why your far alarm may be blinking red. It’s really depends on what type of fire alarm you have. However this does usually mean that there is a problem. Fire alarm blinking right could mean that you have no power from the utility, in a normal state it would be green.

This is nothing to be alarmed about and this is only in the case of hard wired smoke detectors. However in battery model or battery models only. A red blinking light may mean it’s time to change the battery.

Changing the batteries is easy as usually on the back of the side of the smoke alarm and it is usually a 9 V battery. Different models have different specifications. So make sure you keep your owners manual when dispatch centre was originally installed so you can refer to it if there’s an issue.

Why Is My Fire Alarm BlinkIng Red With The Battery Out?

If the battery is removed from the hardwire smoke detector with battery backup. This means that it was telling to tell you that the battery has been removed. Both the battery and AC power this is common and in order for the lights to stay green battery must be installed in the fire alarm.

Why Is My Fire Alarm Blinking Red With New Battery?

If you have a battery model only and the light is still blinking after you change the battery in the smoke detector itself, it could be faulty and or the battery may be no good. Check on the date on the battery to make sure that it is suitable.

Smoke detectors are relatively inexpensive an is a good idea to keep them up to date. here are some links to we we suggest.

Why is my fire alarm blinking red every 10 seconds Kidde?

Kidde smoke detectors and fire alarms are specifically designed to beep or flash red when the batteries do to be changed. This can happen every six months and it’s a good practice you should change your battery every six months. This is not something to be overlooked.

A good working smoke detector is extremely important for the safety of you and your family and your home. You’ll notice that once the batteries changed in the smoke detector will stop blinking red. It is important to check your manufacturer specifications are instructions because every single style of smoke detector operates a little bit differently.

What does the red and green light mean on a smoke detector?

Having said that battery smoke detectors only, usually do not have a green light. They usually only have a red light. The red light which is continuously on means at it is in good working condition. If the light starts to blinks this indicates that there’s a problem with the smoke detector.

Like I mentioned before. You will most likely need to change the battery and or replace smoke detector. Smoke detectors are only good for a period of 10 years. At that point they need to be changed out anyway.

Why does my hardwired smoke alarm go off for no reason?

Your smoke detector made me what we call going off as a nuisance trip. This is tripping and smoke protectors is caused for a variety of reasons. Quick temperature changes in the room. Yes believe it or not this can happen. Another common condensation it condensation. If you have smoke sector hardwired together and one of them just sense condensation it may set them all off.

This usually applies to a smoke detector that is installed in a damp wet basement area or an attic. Sometimes this causes them to drip in sweat. Any water will set off the sensitive electronics inside the alarm. If this happens you should replace the smoke alarm and solve the issue causing the condensation to occur.

How do you reset a hardwired smoke detector?

This will completely clear the fault so the smoke detector can return to normal operation.

What does a red light mean on a carbon monoxide detector?

Can you unplug a hard wired smoke detector?

However it should be noted that when you release the smoke detector and you disconnected from a hard wired 120 V circuit that will most likely going to a fault signal. This means that it has sensed no AC power so that the smoke alarm can be working properly.

Regular smoke detectors or hardwired smoke detectors of this kind will not set off an alarm but it may start beeping. That to let you know or go into a red light flashing mode so that you’re aware that it’s not plugged into AC.

Note: This will not stop a smoke detector from beeping or periodically going off as it will usually have a battery backup.

Will disconnecting a fire alarm set it off?

If you’re talking in terms of a smoke detector in your home or residential dwelling and you unplug it or disconnected from power then no it will not go off. It will simply go into a fault mode to let you know that it is been unplugged from AC power or the battery has been removed.

However having said that if you’re speaking in terms of a fire alarm like in a commercial building and your remove one of the devices. Then you get get trouble signal and or it will set the alarm off. Be sure to be certain between the two.

In addition some low-voltage security systems with fire alarm option in your home maybe set up the same way. Since there is a loop through the whole system if the loop detects that there is a break by you removing one of the devices. That it was setting into trouble mode or set it off.

If you have monitoring system through your local security company you may want to call them before you try to do this. This could falsely set off an alarm and end up for an expensive service call for falsely a false alarm or police or fire showing up at your home.

Where is battery in hard-wired smoke detector?

There are typically two areas on a hardwired smoke detector with battery backup. For the battery location on the door. Simply on the side of the smoke detector should be a battery compartment with a hinge that clips and opens up in the battery or 9 V battery will swing out.

This is a common place. The other area that would be the battery location would be on the back of the smoke detector. This means you will need to turn the smoke detector counterclockwise to remove it from its holder unplug it from the AC system and then open the door in the back.

You may need a small Phillips screwdriver to open the store or it may pop open with a simple flat head screwdriver. To remove or depress 9 V battery in the back of the smoke detector.

These are the two most common places that you will find the batteries in the smoke detectors. We hope this article better helped you understand about smoke detectors and fire alarms.

Fire alarms blinking red can be one of the most common occurrence is it gonna be rather annoying. Especially when the fire alarm has a trouble signal and you can’t quite figure out why.

They are both reputable companies so we will put some links below this portion of the article so you couldn’t see where to buy them successfully cost-effectively . Thank you for reading this article.

What size wire for well pump

How Deep Underground Power Needs To Be Chart

Electrical For Air Compressor- What You Need To Know