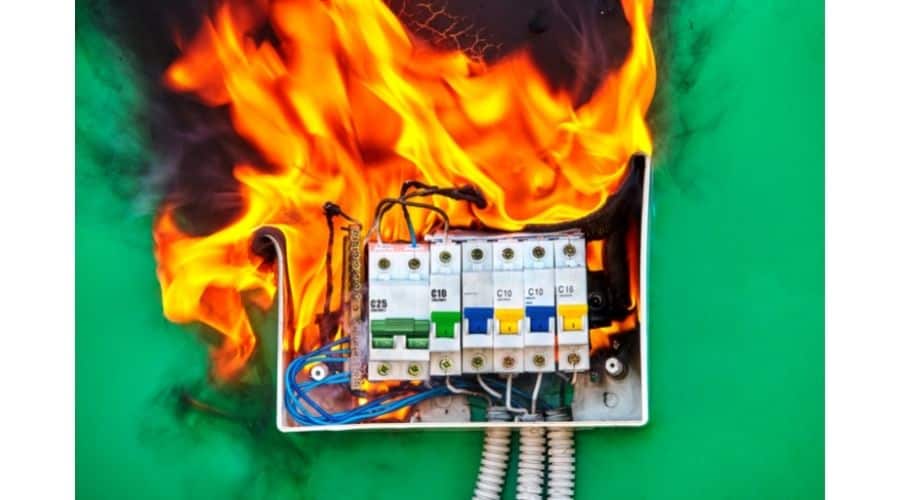 Wondering what causes electrical fire? Well we have seen a few and can tell you all about it. The result is often bad.

As a general rule an electrical fire is caused by an overloaded circuit. This overload causes heat. The heat generated from this process usually causes associated electrical equipment to stress or malfunction. From it causing heat also come arcing. Arcing will eventually cause the fire.

To better understand read on as sometimes the problem is with the electrical equipment and not what you are plugging in.

1.What Causes Electrical Fire and How to Prevent It?

Most electrical fires start from a faulty outlet or an old appliance. However, some electrical fires are started by a fault in an appliance’s cord, receptacle, or switch. Using worn or frayed cords may make them overheat and ignite, allowing the heat to spread. Another common cause of electrical fire is improperly grounding electrical equipment. This can cause a fire. Fortunately, there are many ways to prevent electrical fires.

Overheating or faulty appliances are the most common causes of electrical fires. Be sure to check all cords and plugs before using appliances. If the plugs are frayed or missing, you should replace them. If these appliances aren’t in working order, it’s best to have them repaired by a qualified electrician. After the fire has been put out, open windows and doors and put on clean clothes. Then, check your smoke detectors.

Electrical fires are dangerous. They can easily happen in a home or business. In addition to malfunctioning electrical devices, improperly installed light bulbs or light fixtures can cause a fire. Some of these fires are the result of improper wiring. Some of the most common causes of electrical fires are incorrect wiring, misuse of extension cords, or overloaded circuits. Regardless of the cause, knowing what causes electrical failures is essential for protecting your family.

Unsafe electrical cords and appliances are the leading causes of electrical fires. If you have a space heater in your home, make sure that it’s grounded. Space heaters can also cause electrical fires. Be sure to avoid coil-style space heaters. Instead, opt for liquid-filled “soft heat” electric heaters. If your home has outdated wiring, it may not be up to code. Additionally, outdated breaker boxes may have worn connectors that cause an overloaded system.

3.What Are The Signs Of Electrical Fire?

Another sign of an electrical fire is a burning smell. This is the result of damaged electrical wiring. Warm outlets are another warning sign. Call an electrician immediately if you detect a burning odor. If the lights flicker or have a warm spot, the wiring is probably damaged. It is important to get an electrician to inspect it to ensure there is no underlying damage to the home. A burning smell could also indicate that a light bulb is damaged or is too old.

Another warning sign is a charred smell. People affected by an electrical fire will often complain about smelling smoke. In some cases, there may be a short circuit or a blown fuse. If you notice an arching pattern, which is dangerous, it may be an electrical fire. The charred area near the source of the fire can also be a warning sign. What Causes Electrical Fire? If you notice any of these signs, call an electrician right away!

4.Can an Electrical Fire Start If Nothing is plugged in?

If you suspect that there’s an electrical fire, don’t panic. Most electrical devices are designed to be safe, but loose connections and damaged circuits can cause a fire. If you think you’re unplugged, make sure you’re unplugged. This is the best way to prevent a fire and protect your home. You should also call a fire department or electrician if you’re not sure how to safely escape a home.

Fire dangers from plugged-in appliances can also be avoided by making sure that all appliances are unplugged. While unplugging a light fixture won’t cause a fire, it can cause it to short-circuit. This is why it’s important to keep all appliances and lighting fixtures a safe distance from electrical outlets. The U.S. Consumer Product Safety Commission recommends that you unplug all electronic devices when they’re not in use. This prevents them from accidentally sparked and can save your home.

Unplugged outlets don’t provide heat or light, so they don’t pose a risk of fire. However, an unplugged light fixture is a dangerous electrical hazard. A single bulb plugged into a light fixture can ignite if it becomes hot or overheated. It’s important to avoid plugging too many things into one circuit or outlet. Don’t be tempted to pull on the cord to unplug your appliance – it could cause a fire.

5.How to Stop an Electrical Fire?

Once you’ve spotted an electrical fire, the first thing you need to do is cut off the power source. This is best done by turning off the electricity at the main panel. You can do this safely, but you should be aware that this may leave you vulnerable to electrocution. Once you’ve isolated the source, you can try to put out the flames by attempting to extinguish the heat from the appliance.

When you notice an electrical fire, you should call 911 and let them know that you’re in the home. Be sure to tell them that you’re on fire, as these fires often spread rapidly. Also, make sure there are two clear pathways out of the home, because one of them will be blocked. Once you’re outside, focus on putting out the fire. Then, follow the steps above.

You’ll need to be careful not to put water on an electrical fire, because this can spread it and cause an electrocution risk. Unplug all electric devices from the wall, including portable space heaters. If you can, turn off the power to any other appliances in the room, such as a microwave, to avoid the risk of a bigger problem. During this time, it’s also wise to avoid leaving the building while the fire spreads.

6.What Do You Do If a Plug Catches on Fire?

First thing that you need to do is turn off any appliances in the room. This is a safety issue for many households, but not all appliances can be turned off and there are many other ways to put out a small fire. You can use baking soda to smother a fire. However, make sure you know how to conduct electrical shocks so you don’t accidentally touch the hot wires.

Always keep an eye on your extension cords. When not in use, it can easily overheat and catch fire. Make sure that all plugs are unplugged, even the grounding ones. Be sure to disconnect curling wands and other heated appliances. Only use extension cords if you are using them temporarily. Eventually, your home could become uninhabitable, and you’ll have to pay for a new electrical source.

7.Can Bad Wiring Cause a Fire?

If you’re concerned about faulty electrical wiring in your home, there are some things you can do to prevent fires from happening. First, check the outlet circuits. If they have char marks, the outlet is faulty. Charring indicates a high-heat electrical arc, which can melt outlets and leave burn marks. If you notice any of these signs, contact an electrician immediately. The wiring in your home may also be old, and that can make it more susceptible to fire. Because older wiring can’t handle the electrical demands of modern families, it may be prone to catching fire.

Another common cause of electrical fires is an overloaded electrical circuit. When you have too many appliances running at once, they might overload the circuit and start an electrical fire. Overloaded circuits can spark and deteriorate, causing an explosion or a fire. You may not even know that the outlet is overloaded. This is a dangerous scenario. The only way to avoid an electrical fire is to check the electrical outlet regularly for signs of a blown fuse.

Other common causes of fires in homes are old appliances or overheating ones. Look for frayed cords and damaged plugs in appliances. If you find any, replace them or have them repaired by a qualified electrician. Regardless of the cause of a fire, a professional inspection will help you avoid costly repairs and losses. When it comes to electrical fires, a Watts Up Electrical inspection is the best way to avoid disaster.

8.How Fast Does an Electrical Fire Spread?

An electrical fire can be a devastating event for a home or business owner. The fastest way to put out an electrical fire is to cut off the power source. If you can’t do that, call a qualified electrician immediately. If you can’t, use a fire extinguisher or call emergency services. Once you are outside, be sure to remove all flammable materials and leave the house.

If you have a burning appliance, make sure you unplug it before attempting to tackle the fire. If you have a portable space heater, make sure it is properly grounded and that the safety mechanism is working correctly. Never leave a portable space heater on overnight. This can lead to a dangerous electrical fire. Remember, you can’t fight an electrical blaze with water alone. It only takes a matter of minutes for a room to fill with smoke and flames from what causes electrical fire.

In addition to protecting your home from fire,what causes electrical fire, circuit breakers also prevent electric shocks and accidents. Arc fault circuits can cause electrical fires if the wires are not wired appropriately. They are crucial safety devices that can help keep you and your family safe. They can also test if you have a short-circuit or other problem. However, before putting a circuit breaker in place, make sure you know which size of wire your house uses. If the wire is too small or too big, it will burn down the room and lead to what causes electrical fire.

.Electrical fires are often caused by an electrical short circuit. A short circuit occurs when a wire connects two different electrical systems. This allows electrons to flow without resistance. However, unrestricted flow will increase amps, and this overload can lead to a fire. A short circuit can cause heat, sparks, and arcs. Having a circuit breaker is one way to protect yourself and your home from an electrical accident.