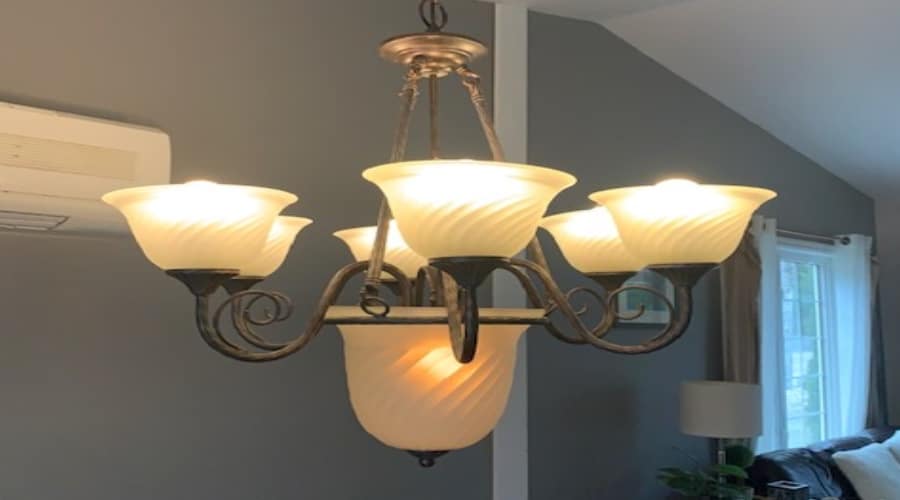 Are your lights dimming in house randomly? Do you find they keep flickering all the time? You are not alone. Let us help answer that.

Your lights dimming in your home are caused by other appliances or electrical devices on the same circuit drawing too much power. They could also be dimming from a loose connections in your electrical system. You will need to contact an electrician to correct the problem. They can run a new circuit for you so the lights are on a different circuit.

Lights dimming in the house randomly how to check if it is a loose connection issue?

If your lamps are dimming in your house, the answer could be found by touching the light switch and seeing if it turns on.

This may reveal a loose connection if the switch is going bad.

If this doesn’t work, you may need to reset your circuit breakers.

However, most lights will work properly with this first method.

You may also have to plug in a lights detector which is an electronic switch to find out if your lamps are really on the same circuit as the fixtures.

Faulty breakers and bad switches are usually the culprit. If they do not have a solid connection they will cause blinking of dimming to the attached fixture.

Lights dimming in the house randomly how to check if it is a power surge issue?

Installing your TV on an extension cord near the socket in the living room can be a sure fire way of detecting a power surge.

Power surges happen when there is a failure of a power line.

It can cause some damage to your property, particularly your computers and other electrical devices.

The TV that you are using on an extension cord is one of them. If the TV has a surge protector, it will protect it from surges.

If your TV has a surge protector and you see the TV coming up with an error message saying, the set is now unplugged or the power is cut off, this is a clear indication that the surge has taken effect.

Can lights dimming in the house randomly be caused by other electrical devices?

Speak to an electrician about the issue. They can help you determine the true cause.

You will need to check all the connections to find the weak ones. Do the same for all the lights in your home. Replace any damaged parts.

What t if the dimming is caused by faulty wiring and is the major reason for this problem.

You will need to replace your wiring. They can help you find faulty wires in your house and fix them.

If you are a homeowner but do not have an electrician, ask your insurance company for a list of approved electricians in your area.

You will also need to check your homeowner’s policy to make sure it covers you for electrician services.

What to do if light dimming is caused by a loose connection in your home?

The easiest way to troubleshoot is to unplug everything (except for one surge protector) and let everything rest for at least 15 to 20 minutes before powering them back on.

If the power isn’t still showing on the surge protector, power on a few things at a time.

Loose connections in the home can be a culprit to you homes electrical system.

Will a bad ground wire cause the lights to dim in the house?

In this scenario, you may need to call a licensed electrician. This is very common with electrical systems. However, a wiring problem on the same circuit may also be the cause.

Your lights may dim from a loose connection in your electrical system.

The electrician can run a new circuit for you so the lights are on a different circuit. A faulty circuit within your home or workplace may be to blame.

If you have a bad system ground, or a bad ground in an a circuit this can cause all kinds of strange things to happen. Lights dimming is one of them.

Without the proper ground your electrical system will not work correctly.

Are lights dimming in the house dangerous ?

Imagine a lamp light flickering on and off? You are used to it. Now imagine the lights on your television flicking on and off? This is your house without electricity.

Many homes only have an electrical supply and electricity supply out, meaning you have a split power supply which is not designed to handle these situations.

This has happened when you have tried to charge the batteries and the outlet you are using is faulty.

You could also have a bad power supply, which is designed for smaller power supplies, causing it to become overloaded.

If the electricity supply is faulty the damage can be seen as the lights dim or flicker.

This is dangerous to the devices that you plug into these outlets.

Can bad wiring in my home be a fire hazard?

The wiring in your home can be damaged by faulty equipment, as well as the use of electricity incorrectly.

The best way to deal with the issue is to get your house inspected by an electrician.

The most common form of damage caused is overloading of a circuit.

Bad wiring can also cause flickering lights and electric appliances to lose power.

A faulty or overloaded power system can cause the wires to heat up and that can lead to a fire. The general process to identify and fix the problem is as follows: 1. Analyze your wiring to see if it has faults 2. Fix any faulty wiring.

Many people are surprised by the fact that faulty wiring in your home could cause a fire.

Will a surge protector stop lights from dimming in the house?

During the storm when your power goes out in your home or you have power bumps, electrical appliances on the same circuit could be drawing too much power.

They could be drawing the same power and you won’t be able to tell the difference.

If you have an existing surge protector, it may not prevent your lights from dimming in your home.

However, if you have a new surge protector in the home and it detects that power is going to the appliances in the same circuit it may take the surge instead of it going into other power circuits.

A surge protector will take the surge to the appliances on the same circuit but not the lights on a different circuit.

This is due to the inrush current by the appliances trying to work correctly.

Can it be a bad dimmer in my house?

There are many reasons why that could be.

Here are a few common ones. Overloaded Power Supply You have too many appliances drawing the same type of power.

This can happen when you install new appliances like a new washer or a new stove.

These appliances are normally compatible with one another, but when they are on the same circuit, they can overlap and use up the same type of power.

This will result in dimming in the house. Your lighting fixtures or bulbs will draw power from a different circuit, but your lights will only dim on one side of the house.

When you move to the other side of the house, your lights will not dim as much and this could be the cause of the dimming or flickering.

A bad dimmer, especially a newer led style is sensitive to voltage fluctuations. If it takes too many it will become faulty and cause lights to dim for no reason.

What do electricians charge to troubleshoot?

An electrician can usually fix a problem that is causing a strange flickering in your electrical system.

However, they can also do much more.

For instance, you might be able to get a wide range of benefits from them by doing a minor home improvement.

If you’re interested in what the price tag is for this service, call a local electrician to get some pricing options.

Electricians usually have a general flat rate call out charge.

For more on some of the products that we recommend…….

Cost To Wire A Pool Right From An Electrician

What Color Should I Put My Led Lights On