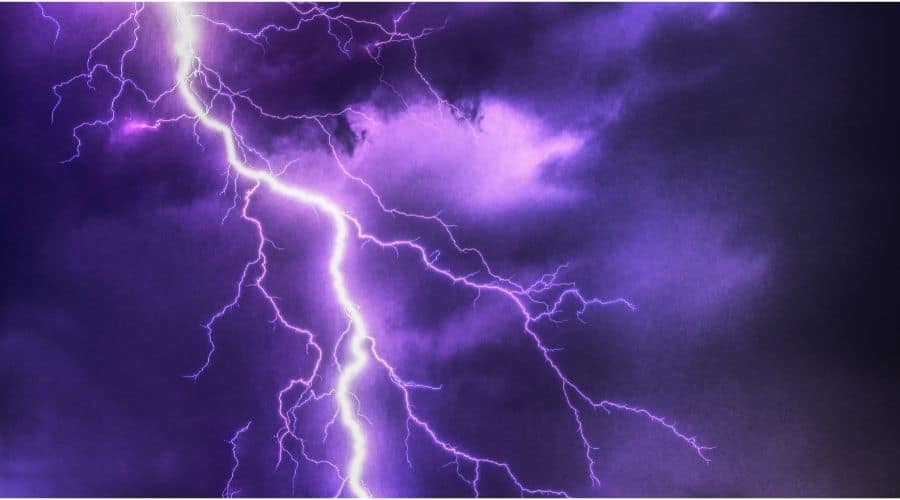 Is it safe to use the internet during lightning? How about mobile Internet? Should I shut down my router? Is it a good idea to turn off my router, too?

On average you will not get electrocuted from using wifi during a lightning storm. However lightning can take out your router and disable your internet. It is recommended that you have some form of good surge protection to help against this.

Here are some answers to those questions and more. Read on to learn more about internet safety. This article will cover a few things you should know about lightning and routers. Hopefully you’ll find it helpful. In the meantime, enjoy your lightning-free day!

FOR MORE ON SURGE PROTECTORS…..

Is it safe to use internet during lightning?

Lightning can strike any object it can reach, including your internet connection, so you’re probably wondering if it’s safe to use the internet during a storm. This question is a reasonable one, because lightning does not affect internet connections directly, but it can harm some internet equipment. In fact, lightning can damage routers and other pieces of equipment when it strikes nearby infrastructure. But there are some precautions you should take to keep yourself safe.

It’s also important to make sure that your laptop isn’t plugged in when you’re outside during a thunderstorm. Lightning can cause power surges, which can damage electrical equipment and even people. Even wireless devices aren’t safe from this, so it’s safer to use them during a storm if you can wait to charge them. If you have to use the internet, make sure you’re using a wireless connection. If you can’t do that, then you can always turn off your device or go offline for a while.

Is It Safe To Use Internet During Lightning-Is it safe to use mobile internet during lightning?

It is a common myth that using your mobile phone while near a thunderstorm will cause you to be struck by lightning. However, this is simply not true. Lightning is an electromagnetic field that strikes metal objects that have a high charge. Likewise, lightning can damage some internet equipment. Lightning can also damage your router or cell phone if it strikes the equipment over which it sends signals. So, it’s safe to use your mobile internet during a thunderstorm, but not during an actual lightning storm.

Lightning strikes have been known to hit mobile phones, but this has rarely been reported in developed nations. This is because lightning doesn’t strike people in the same way as a cell phone does, making the risk of damage much higher. In remote areas, such as Nepal, people don’t use mobile phones or other electronic devices during storms. Nonetheless, mobile phones aren’t immune to lightning, and they’re not the only ones at risk.

Is It Safe To Use Internet During Lightning-Should I turn off Internet during a thunderstorm?

If you’re wondering: Should I turn off Internet during a thunderstorm? It depends. The internet is important to keep you connected, but lightning can also damage your electronics. Even if your device isn’t affected by the storm, a strike can cause a power surge and damage your electronic devices. If you’re in a building, you should consider using a surge protector. The storm can also knock out cellular service, so you may want to consider disconnecting from the internet.

You should also make sure to unplug all of your electrical equipment. Doing so can save you money if your equipment is damaged. This precaution applies to internet equipment, too. But even if you can’t do so, you should still turn off your wireless internet. Lightning can damage your equipment, so turn it off! But don’t worry, there are ways to avoid getting zapped by lightning.

During some seasons, the world is subject to heavy storms with plenty of thunder and lightning. Many internet users are wondering if using their Wi-Fi routers during these storms will put them at risk of lightning strikes. The answer to that question is no. But Wi-Fi signals do attract lightning, because they transmit from the wider internet to your devices. This phenomenon is based on the fact that lightning can be attracted to air.

This phenomenon is extremely rare, but when it happens, you can still be at risk of getting struck by lightning. While the odds of being struck by lightning are very small, if you are unlucky, it will damage your laptop or wireless connection. Lightning can also damage your computer if it is within close proximity to an electrical outlet. To keep your laptop safe from lightning strikes, make sure that it is away from the router.

Lightning can cause problems for your wireless connection if it strikes your modem or router. Because lightning travels along the path of least resistance, it may strike RF waves and affect some internet equipment. While this rarely causes problems for mobile devices, it can cause damage to your router or modem. Lightning strikes can also disrupt cellular networks and internet service. If you live in a high-risk area, turn off your WiFi network and rely on cellular service instead.

Before the storm hits, unplug your electronics, including your modem. Unplugging your devices before a storm can prevent lightning damage. However, it may not be wise to shut down your WiFi network for web browsing. Lightning surges can also damage cable modems, so disconnecting your modem before the storm hits is recommended. Unplugging all your electronics can help prevent lightning damage. However, it is not a good idea to disconnect the modem while using the internet.

Is it OK to use computer during thunderstorm?

If you live in an area where thunderstorms are common, you should avoid using your computer during this time. Lightning can cause large voltage surges. Because computers are so close to the source of power, it can be more vulnerable to such a surge. A computer that is not equipped with a UPS may have problems during thunderstorms, but it can still be used on battery power. However, if you’re unsure whether it’s safe to use your computer during a thunderstorm, check out these tips.

It is also possible for a phone to be struck by lightning, although it is not a very common occurrence. This is because the Wi-Fi signals are not solid objects, but rather waveform frequencies within the electromagnetic spectrum. Because the phone is connected to wireless routers and cell masts, lightning strikes aren’t as likely to strike the users themselves. But if lightning strikes a cell phone tower, it can damage the equipment, and that may be a cause for concern.

How do I protect my router from lightning?

Lightning is a huge threat to wireless networks. In fact, lightning is one of the worst forces on earth. It is a powerful electrical discharge in the atmosphere that can cause extensive damage, including overheating, fire, and permanent destruction of your device. You can protect your wifi from lightning by taking a few precautionary measures. Lightning is a natural occurrence that occurs when the earth’s atmosphere becomes too moist. Lightning strikes can be as frequent as 100 per second in some places. Lightning storms can last for hours or days, so protecting your wifi from lightning is absolutely necessary.

Lightning can be accelerated through your network by passing through appliances. If your router is located close to a power line, consider installing a disconnect switch on the device. A disconnect switch acts as a physical switch, physically switching off power and activating a series of contacts. Lightning bolts can jump up to several feet and can cross both conductors to reach the ground. This prevents lightning from directly striking your router, and can protect you and your property from damage.

Can a Storm Knock Out WiFi?

If you have a wireless connection at home, you’ve probably wondered, Can a storm knock out WiFi? You’re probably wondering, “Is my WiFi signal secure?” The truth is, there are many factors to consider. Power outages and rain are the two most common causes of internet outages during storms, but there are other things you can do to keep your connection going. First, try plugging your laptop into a backup power source. While this won’t fix the problem, a battery backup should keep you connected in case of an outage.

The first thing to keep in mind is that the signal of a satellite dish is more susceptible to bad weather than that of a wired connection. Satellite signals are especially vulnerable to bad weather because they travel further through the atmosphere than other forms of wireless signals. That means you have to install equipment outdoors, which makes them more vulnerable to problems with weather. However, if you don’t mind the weather, don’t worry; you can still get your internet service.

Another cause of slow internet speed during a storm is physical cables or satellite dishes. Physical internet cables may be affected by rain or snow, but most users won’t be impacted. However, if you’re using WiFi outside, you should be aware that the signal may be affected if the cables get wet. This is especially true if the WiFi is connected to a satellite dish. If you’ve recently upgraded your internet connection to a high-speed connection, your internet speed should be unaffected. If it’s still slow or unusable, the issue might be due to humans and not a storm.

While lightning can easily destroy one Ethernet port, it can also damage the entire network. Power over Ethernet (PoE) devices are particularly vulnerable to this phenomenon. While the Ethernet standard has protection against over-voltage, PoE adds additional components that make them more susceptible. This is due to the fact that transformers can pick up excess voltage and cause damage. So if you have a long cable between two devices, this issue may become more pronounced.

What Happens If Ground Wire Is Not Connected

When Is Conduit Required For Electrical

How Long Does It Take To Charge A Scooter