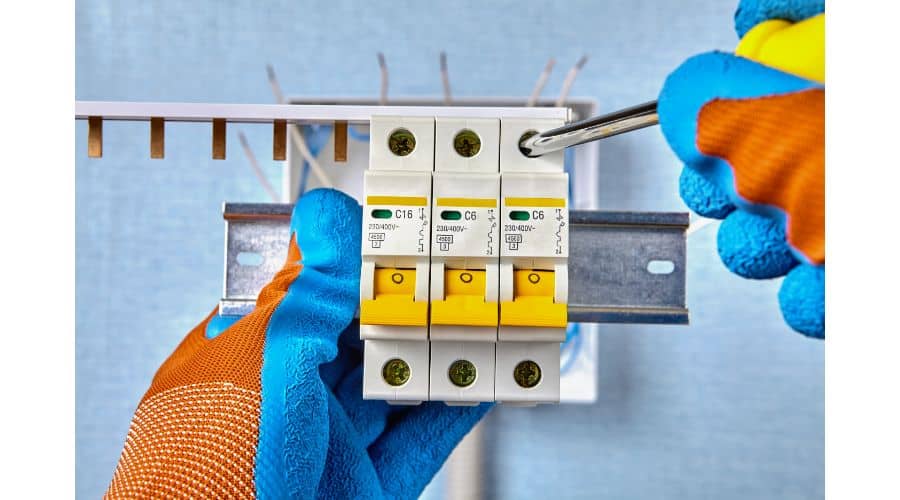 If you are wondering what is a Double Pole 30 Amp Breaker is and why you should have one in your home, read this article!

A double pole 30 amp circuit breaker has two poles that use two slots in an electrical panel. This creates a double voltage or 240 volts for different applications such as appliances and heavy equipment.

You’ll learn what this device is used for, how it works, and whether a two-pole 30 amp breaker has the same 30 amp capacity as a single-pole breaker. In addition, you’ll also discover the different uses for double-pole breakers and their differences.

A Double Pole 30 Amp Breaker is a useful way to protect a circuit from overload or short circuit. It’s typically used to protect a 120/240V circuit and can be used in homes and small businesses. This breaker is compatible with the Outback GS Load Center. You’ll want to choose one that fits both your panel’s slots and the breaker’s output. There are two types available: single pole and double pole.

You’ll probably need to use a 30-amp breaker for a room air conditioner. You can also use a double-pole breaker for other electrical appliances, such as an electric clothes dryer. These appliances, however, are typically smaller than the ones you’ll need. For instance, a 30-amp breaker is not suitable for a large oven. A double-pole breaker should be used where power usage is constant, such as in a laundry room.

You may need to use a double-pole breaker in your home, especially if you have a 220-volt circuit. The double-pole breaker requires two slots in your breaker box and a longer toggle switch. It’s also common to find 30 amp circuits in small homes, but they’re not common in the United States. A Double Pole 30 Amp Breaker can protect a 220-volt circuit and is used in homes and small businesses.

What is a double pole 30 amp breaker used for?

A double pole 30 amp breaker is designed to handle a circuit with more than one circuit. It allows you to control two lights or a fan on different circuits. A double pole switch has two wires, one connected to a lug on the breaker terminal and the other to the black wire of the switch. It hooks into either one of two slots. Two adjacent slots are needed.

If you are having trouble determining what your current electrical panel’s breaker ratings are, you should know that a two-pole 30 amp breaker is not equal to 60 amps. The difference lies in the wiring of the two poles. In order to get 60 amps, you have to double the number of the two legs and tie them together. You may have a double pole breaker that serves baseboard heaters. A 40-amp breaker will serve an electric dryer. A 50-amp breaker is for an electric range. A 70-amp breaker is suitable for a large air conditioning unit. The breaker serves a subpanel.

To learn more about breaker types. These articles can answer your questions about single and double pole breakers. Their experts are well-versed in power transmission, and are willing to help you find the right circuit breaker for your home.

A Double pole 30 amp breaker is essentially two single pole breakers stuck together. The difference is that instead of one leg carrying the 30 amps, each leg pulls in 30 amps. In addition to the two legs, there is also a ground wire, which goes on a ground bus. It is important to know the amperage capacity of your breaker, because the amperage you can safely handle with one will depend on the wire you’re using.

If you’re replacing a 30-amp breaker in your home, you need to remember to consider the wire gauge used. In many cases, you can use a 20-amp breaker on a 20-amp circuit, but not vice-versa. A 30-amp breaker requires wire that’s ten gauge, but you cannot use it on twelve-gauge wire. This is because each type of circuit breaker is rated for a certain wire gauge, and a larger breaker will allow more current to pass over the wire.

What is the difference between a 30 amp single pole breaker?

If you’re confused about which breaker is right for your home, consider getting a double-pole breaker. They provide more power, but each one has a different design and function. Double-pole breakers take up two slots in your breaker box and have longer toggle switches. The single-pole breaker is only used to power household appliances.

Most residential homes are wired to 120-volt electricity, and most appliances use that voltage. However, some appliances draw higher voltages and require dedicated circuits. In such cases, a breaker rated for this higher voltage is the best option. For example, a 30-amp double-pol breaker is more efficient than a single-pole 30 amp breaker.

When should you use a double pole breaker?

A double pole 30 amp breaker is a 240-volt breaker with a live feed and a neutral wire on the top. It isolates the load from the circuit. The circuit’s inputs are connected to the breaker’s two terminals. 240-volt systems typically have two wires that provide 120-volt power and are fed into a double pole circuit breaker.

If you have a single-pole breaker, it will only require two wires and one switch. They are rated at twenty or thirty amps and are typically found on the general lighting circuits of houses. Single-pole breakers can be installed in a two-slot receptacle. They are good for lower-voltage circuits, but they won’t work for high-voltage appliances.

What size wire do I need for a double pole 30 amp?

The wire size for a double pole 30 amp breaker depends on the amount of current it needs to carry. A simple circuit with ten-gauge wire is plenty, but you can also use thicker wires to stabilize the current. For example, you could use 10 gauge copper wire. However, the wire size is an important consideration because the wrong wire can damage appliances and cause fires.

How many amps does it take to trip a 30 amp breaker?

A 30-amp breaker will trip when it detects a continuous current of 100 percent or less than 80 percent of the wire’s rating. However, if you are using an appliance that requires more than thirty-five amps, you should check the breaker’s maximum capacity. A 30-amp circuit can safely handle approximately 6,000 watts. By comparison, a 50-amp circuit can support more than seven thousand watts.

The size of the wire used to run your circuit breaker is crucial. You need to use a wire size appropriate for the circuit breaker’s maximum ampacity. Various factors determine the wire’s size, including wire diameter and American Wire Gauge. A higher number signifies a smaller wire size. You must also keep in mind that bigger wires cost more, but they have a longer lifespan.

Can You Use One Side of a Double Pole Breaker?

When tying two single pole breakers together, you’ll need to make sure that the fuses are installed properly. You may be tempted to bridge them, but this can be a dangerous practice and can violate building codes. So, the safer option is to use a double pole breaker. Regardless of the type of circuit breaker you choose, you should check the manufacturer’s instructions and contact a licensed electrician before attempting bridging.

If your house has a dual circuit, you’re probably wondering: Can I replace a double pole breaker? The answer depends on the size of your circuits. For example, if you need to replace the breakers on two circuits in the same area, you can go with two single-pole breakers. The wire gauge on one breaker should match the one on the other.

How To Test Main Breaker