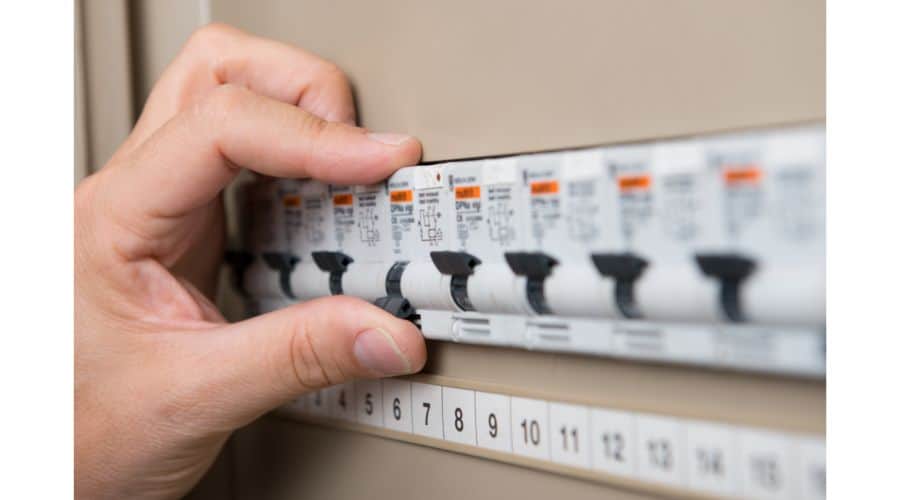 If you have a circuit breaker, you might have a Circuit Breaker Test Button on your panel. This button can help you reset a circuit breaker in a variety of situations. Its purpose is to simulate a defect and can be a great help in identifying a malfunctioning breaker. Press the button to trip the breaker and observe if it trips to the middle position or does nothing. If it trips to the middle position, you can assume it’s defective and should be replaced immediately.

Some breakers do not trip or are set in the OFF position. These types of breakers have special markings on them, including a test button. This button may be a white button, green or yellow. The button may be marked in fine print. The button is not standard and may be different than the original one. To check whether the circuit breaker is malfunctioning, press the white button on the panel.

How do you reset a breaker with a test button?

The next step is to find the test button on your circuit breaker. It’s often located on the back of the switch. Pressing this button will trip the breaker and cut off power to the connected devices. This can be very useful when appliances are malfunctioning or you smell burning.

You can also reset your circuit breaker with a test button by pushing it. The test button will create a small amount of resistance across one half of the device, which causes it to trip. After this, press the reset button on the device. Once it is reset, you can check other impacted plugs and devices.

Should the test circuit breaker be on or off?

A circuit breaker’s test button can help you determine if it’s working properly. By pressing this button, you can interrupt the flow of electricity through the breaker. This will cut off power to any connected appliances. This can help you figure out what’s wrong with an appliance or if you’re smelling something burning.

During testing, you may also need to turn off some devices before trying the rest. Overloads can make circuit breakers unreliable and weaken them. Bypassing circuit breakers may cause a fire in the house, or a device can malfunction due to too much current flowing. The heat and smoke generated by this type of overload will damage the device.

Is it safe to reset circuit breaker?

If you have an electrical problem, it may seem like your best option is to call a professional electrician to reset the circuit breaker. But while this is not necessarily a dangerous procedure, it is not a good idea to attempt to reset circuit breakers repeatedly. This method can result in a circuit breaker tripping again, which may lead to a serious electrical hazard.

There are two basic ways to reset circuit breakers. One is to flip the breaker off and back on. If the circuit breaker trips after being reset, this usually indicates a fault in an appliance or light fixture connected to the circuit. You can also press a special button to test the breaker and see if the problem persists.

In some cases, you might be able to reset a circuit breaker yourself without professional help. If you have 480-volt equipment, you can do this by opening the metal enclosure door. Otherwise, you can place a plexiglass barrier over the exposed energized parts.

How do I reset a breaker that won’t reset?

To reset a circuit breaker that won”t reset, first find the panel where the breaker is located. This is typically located in the garage or side of the house. The breaker panel contains switches for the rooms that are affected by the breaker. Flip the switch to the other side and wait about 5 Mississippi seconds. If it doesn’t reset after this time, you may need to call an electrician to fix the problem.

What is the yellow test button on the circuit breaker?

What is the blue test button on a circuit breaker?

When your circuit breaker trips, it can be a good idea to try to reset it by pressing the “reset” button. You can also try plugging in a lamp to check if it’s tripped by pressing the “Test” button. This will reset the breaker and check to see if there’s an overheating problem.

Some breaker models have a green or blue test button. These buttons should turn the breaker off by shorting the neutral wire feeding the circuit to the neutral bus in the electrical panel. If you don’t see this button, you should replace the circuit breaker.

Most breakers must be turned off before they can be reset. However, there is one brand that automatically trips to the off position when you push the switch. You can also try to reset a tripped circuit breaker by flipping the toggle toward the outside of the panel.

What does test button on outlet do?

If you have an outlet that doesn’t work, you’ll want to check the circuit breaker. It’s important to make sure the breaker is functioning properly, as a faulty circuit breaker can result in a dangerous electric shock. Many outlets have a reset or test button, which you should press to reset the breaker. However, if the reset button doesn’t work, you’ll need to call an electrician.

The test button is a safety feature that is built into standard circuit breakers. It should trip when an electrical device is plugged into a low-voltage outlet. But there are some instances where you don’t need to press the test button. When this happens, a person could be electrocuted.

The test button is a simple way to see if your circuit breaker is functioning properly. You press the button to interrupt the flow of electricity through the breaker and shut off the power to any connected devices. This can be useful if an appliance is causing problems or if you can smell burning.

How Many Times Can You Reset a Circuit Breaker?

If the circuit breaker is on, unplug all of the appliances to test for a short or overload. The problem is usually caused by too much electricity flowing through the circuit. The most common cause is an overload. Check the outlet and power cord insulation for burnt smells or charring.

After you’ve ruled out other possible causes, you can reset the breaker. To do so, you just have to move the switch from the off position to the on position. If it still does not close, you need to replace the breaker. You can also get $5 breakers or even big ones from zog. If you’re unsure about how to replace a breaker, don’t be afraid to consult your local electrician or safety professional.

Circuit breakers are an essential safety feature of modern houses. However, many homeowners do not know how to reset a circuit breaker. These devices protect the home by disconnecting electricity when a current exceeds its rated value. This prevents fried wires or exploding light bulbs. While resetting a breaker is not a difficult process, it is essential that you know how to use it correctly.

What is the Life Expectancy of a Circuit Breaker?

According to the Consumer Product Safety Commission (CPSC), a circuit breaker’s life span is typically between 30 and 40 years. This number is based on the type of breaker and environmental factors. It is best to store a circuit breaker indoors in a temperate environment. Excessive heat or humidity can significantly shorten the lifespan of an electrical safety device. Frequent tripping of a circuit breaker can also hasten its failure.

Circuit breakers are essential in our modern world, with electronic appliances being used in many settings. They prevent exposure to electrical currents caused by faulty wiring, faulty insulation, or voltage fluctuations. In addition, circuit breakers protect people and property from potential harm caused by electric shock.

How To Wire A Double Pole Breaker