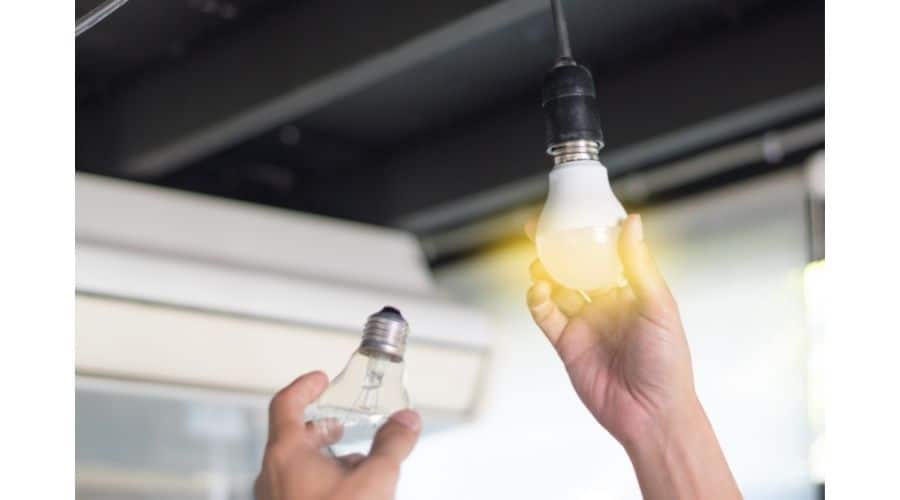 You may be wondering can LED lights burn out, but what are the symptoms? What can you do if the light in your home is not working anymore?

Depending on the quality of the led light it can last from 25000 hours right up to 50000. However they can burn out prematurely. They are very sensitive to spikes and variations in voltage levels which can cause them to stopp working.

Can led lights burn out ?

LED lights can burn out in a few ways. They may become dim and then completely go out because of a failure of the light-emitting diodes (LEDs). However, they do not burn out in the traditional way, as many other types of artificial lights do. Nonetheless, you should be aware that they do eventually go out of service. Here are some tips that will help you avoid such a disaster.

LEDs are cool to the touch, but they do produce heat. As they lose their ability to transfer electrons, they wear out. Over time, LED lights can last up to 25 thousand hours. This is more than twice as long as incandescent bulbs and five times longer than most Compact Fluorescent Lamps. Even if the light doesn’t burn out, it may take up to three decades to reach the end of their life cycle.

What happens when an LED light burns out?

If you’ve ever wondered how LED lights work, you’ve probably wondered how they produce heat. LEDs actually consist of individual Light Emitting Diodes (LEDs), each of which may have a lifetime of over 100,000 hours. When one LED fails, the entire bulb ceases to function. But what happens when an LED light burns out? Here are some things to know. Let’s look at some of the most common causes of LED light failure.

High voltage is one of the most common reasons for LED lights to burn out. LEDs operate better under lower voltage, which means that the home power grid can be a problem. LEDs are designed to run at a specific voltage, and it’s the led driver’s job to convert this voltage into the correct direct current for the LED chip. When an LED fails, however, the LED driver might have failed to adjust in time, causing the LED to burn out prematurely. Another possible cause is a faulty batch of lightbulbs.

Other causes of LED failure include improper installation, incompatible dimmer switches, and improper wiring. LEDs are not burnt out in the way that incandescent lamps do, but they do become dim or unresponsive when overheated. Some people also experience problems with the internal components, including corroded capacitors or drivers. Checking these issues can help you figure out the cause and replace the LED.

Can a LED strip light burn out?

LED lights have a long life span. However, in rare cases, a strip light can stop working. While it’s rare for LED strips to burn out, you should check the light’s specs to be sure. One possible reason for a strip to stop working is a bad connection between the power supply and the LED. Depending on the power source, a bad connection can be caused by a number of different factors.

Another possibility is an improper installation. Improper installation will cause the strip to flicker and overheat, and can even ruin the power supply. Fortunately, waterproof lights are more tolerant than most types of lighting. Nevertheless, they should be placed away from wet surfaces and in areas where they won’t get damaged. LEDs are energy-efficient and won’t increase your electric bill. As long as you take care of them, they can last for a long time.

In the event that an LED strip light burns out, it will become dim or off-color. Fortunately, these lights don’t burn out the way we think of other artificial lights. In fact, they generally fail due to a malfunction in the power controller. In such a case, you can replace or return the LED bulb, or have it replaced. A defective LED will only become visible when it’s the first one to burn out.

How long should LED lights last?

The average lifespan of an LED light is around 50,000 hours, which is about 50 times longer than that of a traditional incandescent, halogen, or CFL. An LED rated for 50,000 hours will last for approximately eleven years when used twelve hours a day and seventeen years if used eight hours a day. The lifespan of LED lights can vary depending on various factors, including the type of environment they’re placed in.Can LED Lights Burn Out

One of the questions people have is: “Can LED lights be left on 24 hours a day?” While they certainly do help cut energy bills and reduce our carbon footprint, leaving LED lights on 24 hours a day does not necessarily make them eco-friendly. It is better to ask yourself why you would leave a light on all day than to leave it burning and overheating. You might be surprised to find that LED lights can be left on twenty-four hours a day without losing their luminescence.

LED lights are safe to leave on all day, but they should not be left on all night. Most well-manufactured LED lights can be left on for up to seven days or 24 hours a day. This is because LEDs emit little heat and are not prone to burning or overheating. Furthermore, because LEDs use no filaments, they do not risk catching fire and causing house fires.

Are LED lights safe for bedroom?

When it comes to choosing the right lighting for your bedroom, LED lights have several benefits. Not only do they use less energy than standard incandescent bulbs, but they also allow you to customize the colors for a specific purpose. Warm white tones with a color temperature between 2,700 and 3,000 Kelvins are recommended for promoting sleep. These lights also have many other benefits, including practicality and cost savings.

For example, using two different bulbs for bedside lamps can make a big difference. While one bulb will produce warm white light, the other will emit cold white light. This means that you can easily change the color temperature in your bedroom when the mood takes you. Another feature of these lights is that they can be dimmed to a mere five percent. This is great for your bedroom and will help you get a good night’s sleep.

LED strip lights are another great option for decorating the bedroom. You can embed them into the ceiling to provide indirect light and break up the moody appearance of the room. LED strip lights can also be installed behind your television to give you enough light for nighttime TV watching. Then, when the night comes, you can switch the strip lights off so that they are not distracting. If you do not want to change the entire look of your bedroom, you can also install a small LED lamp behind your TV to give you a little extra light.

What causes LED lights to fail?

While there are several reasons why LED lights fail, most failures occur gradually over time as a result of reduced light output or decreased efficiency. There are, however, some instances of sudden failure. This is especially true of early red LEDs, which were noted for their short lifespans. Sudden failures can also be caused by thermal stress, including degradation of the epoxy resin package and partial absorption of wavelengths. The latter can lead to catastrophic damage in high-power semiconductor lasers.

In a few cases, the LED Stripe Controller may be the source of the failure. Ensure that the power supply is the correct voltage for the LED strip, and that it is in a cool location. If this doesn’t fix the problem, an electrician may be needed to check the wiring in the lighting system. When all else fails, the LED Stripe Controller is most likely the culprit. To diagnose the error, connect another power source to the strip, but make sure the power supply is of the same voltage as the LED strips.Can LED Lights Burn Out

Why are my LED lights not lasting?

One reason that LEDs fail to last is that they are connected to devices that require a higher wattage than they are designed to handle. If you notice that your LEDs are flickering, the problem is probably the wattage, and you can fix it by replacing the bulb or checking the socket. The other common reason that LEDs fail is that they receive a higher voltage than they should, which causes them to buzz. This is due to the electronic parts of the LED vibrating.

In order to prolong the life of LED bulbs, you should follow the guidelines set out by the DLC. Qualified products meet specific performance requirements, are made with high-quality components, and come with a warranty. The DLC-qualified products reduce replacement time, cool loads, and electrical shocks. For more information on LED bulbs, visit the DLC website. When buying LEDs, make sure to read the DLC label and look for the letter of certification.

What Are The Best Motion Sensor Lights For Outdoors

How To Wire A Ceiling Fan Dimmer