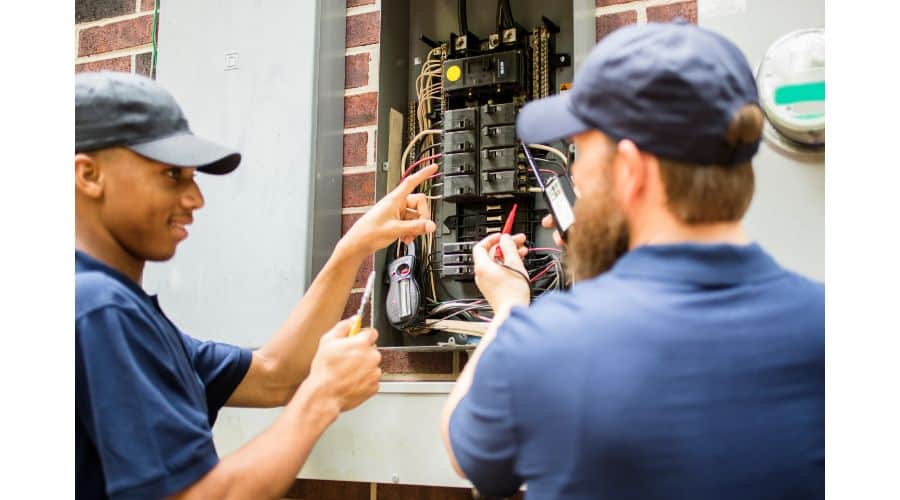 A Breaker box fire can happen as a result of an electrical overload to the electrical system. This is usually caused by overfusing or improper breaker sizing.

Federal Pacific Electric Stab-Lock breakers are notorious fire hazards. These breakers were used throughout the U.S. in the 1950s and 1980s, and they eventually lost their Underwriters Laboratories (UL) listing, an approval seal that ensures electrical items are safe. Because of this, many electrical inspectors are failing to pass house inspections if a homeowner is using FPE products. This is a significant safety concern for homeowners.

A Schneider Electric recall has forced the recall of more than one million electrical boxes made over the past two years due to a risk of thermal burn and fire hazards. These breaker boxes were sold at home improvement and hardware stores across the U.S. and Canada, and were sold at prices ranging from $90 to $1660.

Can a breaker box start a fire?

A breaker box can cause a fire if it contains old or damaged electrical wiring. Fortunately, there are some preventative measures you can take to prevent this from happening. To start, make sure the box is grounded, so that it can’t conduct electricity. Also, check the wiring for fraying or tears. The older type of cables, often covered in fabric, are especially susceptible to damage. In addition, they can also wick moisture into the box, which is a fire hazard.

Breakers can fail for a number of reasons, including overloaded circuits. The most common reason a circuit breaker trips is due to a faulty circuit. It could also be caused by a leak in an acetone container, which could create a gas cloud. In addition, overloaded circuits can damage breaker boxes and house panels. Repeated overloads can even result in melted bus bars that can ignite.

Another way to avoid electrical fires is to use radiator-type space heaters. These heaters are safer because they diffuse heat over a larger surface area. However, it’s still a good idea to keep radiators and heaters away from flammable items. Many electrical fires are caused by outdated wiring in homes. Many homes that were built 20 years ago may not have the wiring capacity to handle modern appliances. Also, make sure the breaker box has enough power to shut off electrical circuits when the load becomes too great.

What causes a breaker box to burn?

If you notice a burning smell coming from your breaker box, there are several reasons for it. One of the most common causes is a circuit breaker that is not properly functioning. This can occur because of high temperatures or heavy electrical usage. In either case, you should seek professional help to diagnose and repair the problem.

Another common reason for a breaker box to burn is that the wiring in it is too hot. This may cause it to short circuit, which may lead to a dangerous electrical fire. When this happens, you should immediately shut off all electricity to your home and call an electrical professional to inspect the breaker.

The burning smell coming from the panel indicates that the insulation and wires in the panel are overheated. This can lead to a fire if too much power is drawn through the power cord. A burning panel can damage your home with flames and smoke. Identify the cause of the burning odor and call an electrician to replace the breaker.

Are circuit breakers a fire hazard?

Circuit breakers, also known as fuse boxes, are used to protect electrical appliances from overheating. In some cases, a faulty breaker can cause a fire, which is dangerous. In such cases, it is necessary to consult a qualified electrician. A qualified electrician can check the condition of FPE or Zinsco panels and take appropriate action if needed.

Circuit breakers shut down the electricity to certain appliances and circuits when they detect an overload or short circuit. Overloading a circuit can lead to dangerous currents, which can cause equipment to catch fire or be electrocuted. Excessive currents can also cause circuit breakers to malfunction and overheat, resulting in a fire.

In addition to protecting electrical equipment, circuit breakers also protect against electrical fires. When they detect an issue, they shut off power immediately and prevent a fire. Damaged wires, overloaded outlets, and circuits can cause arc faults, which cause high temperatures and can ignite flammable items.

What do you do if a breaker catches on fire?

If your breaker box catches on fire, the first thing you should do is unplug any appliances or electronics that are plugged into it. This will limit the spread of the fire, and will also reduce the risk of electrocution. Next, you need to turn off the electricity to your home. Then, you can safely inspect any loose connections and look for any damaged wiring. If you notice any of these issues, contact an electrician for help.

Electrical fires often begin in the wiring. Older homes and appliances with outdated wiring are particularly susceptible to fire. In addition, electrical panels that are overloaded with appliances and electrical cords can fail and become fire hazards. Having fewer electrical fixtures can also reduce the frequency of circuit trips, which may lead to a fire. Also, look for signs of corrosion or wear on the panel. These signs may be a warning sign that the panel is failing.

Can a breaker burn out without tripping?

When a circuit breaker fails to trip, it means there’s a bigger problem. Fortunately, most circuit breakers can be easily repaired. However, it’s always safer to hire a licensed electrician to perform wiring repairs.

Electrical fires often release a distinct odor. The smell may be like burning plastic or rubber. This odor is a sign of a serious fire. An electrical fire can also burn for long periods before anyone notices the smell. It can be difficult to determine which is the source of this odor, but there are a few common signs.

One of the most common causes of an electrical fire is an overloaded circuit. This may be due to outdated wiring that was not designed to handle the increased current load from newer appliances. Other reasons could include a single outlet that is not able to handle the increased demand of modern appliances. In either case, the overloaded electrical wiring can melt or even catch fire.

The first thing you should do is turn off any power sources that you can. Also, make sure that outlets in your home are cool to the touch. Overloaded power outlets and circuit breakers can also lead to an electrical short.

Is it Normal for a Breaker Box to Smell?

An electrical panel can smell funny or even burn if something is wrong with it. The smell may be like smoke, melting plastic, or burnt toast. If you notice the smell, it usually means that a circuit has blown. If you don’t take action immediately, the smell can get worse.

First, you should check whether you have too many things plugged into the breaker. Too many plugged in items can make it trip. Another problem is faulty wiring. The burning smell indicates something is burning inside the breaker. The wires are burning through the protective coating.

There are many causes of an electrical smell. It could be a short circuit or a broken breaker. It could also be an overheating issue or a fire. To ensure your safety, a certified electrical professional can check inside the box and the walls.

The most common cause of a fishy smell in a breaker box is an electrical fault. In many cases, an electrical fault will cause a spark in a wire, which will ignite nearby flammable objects. If you notice a burning smell from your breaker box, you should contact a licensed electrician immediately to diagnose the problem and solve it. The electrical technician will be able to locate the problem and shut off the main circuit breaker, thus preventing a fire from starting.

How Common Are Electrical Panel Fires?

Electrical fires are a common and dangerous hazard for home and commercial property owners. These types of fires can be prevented with a few basic preventative measures. First, you should make sure your electrical panel has good breakers. Faulty breakers can cause a fire. You should also make sure that all connections are made properly.

If you suspect that your panel is faulty, get it checked by a qualified electrician. Moreover, if you suspect that the panel is made of FPE, it is recommended to replace it with a new one. However, do not neglect the old one, as it may increase your risk of a fire.

Besides poor electrical maintenance, other common causes of electrical fires include improper installation of light bulbs and improperly ventilated light fixtures. You can reduce the risk of fires by performing regular maintenance checks, cleaning the panels, and replacing faulty circuit breakers. Also, it’s important to check for kinks and frayed wires because they will create electrical resistance, which can lead to a fire. Faulty outlets can also cause fires.

The most common time for home electrical fires to occur is the winter months. This is when the sun rises later and more heat sources are available in homes. Additionally, there is less humidity in the air, making it easier for a spark to ignite. In addition to these factors, electrical fires tend to occur in the early evening, when the sun is lower and the air is dry.

Turning Off Power To House