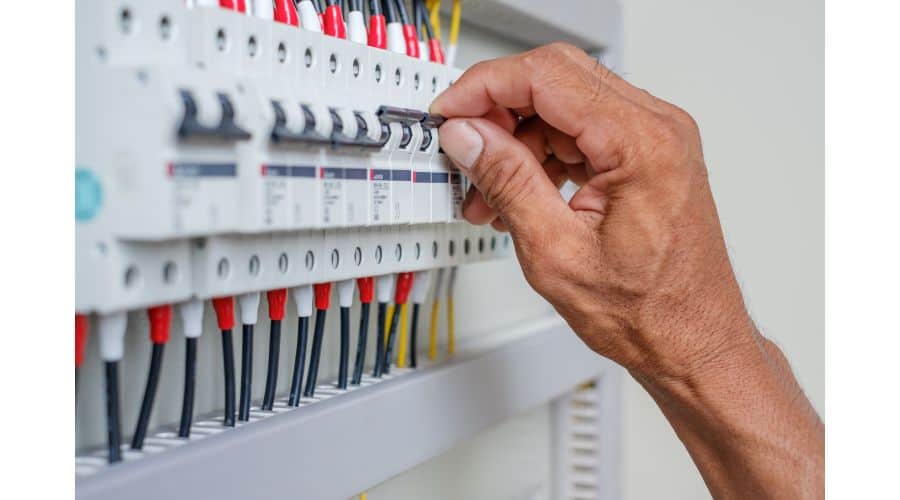 Bad Circuit Breaker Symptoms. When your circuit breaker begins to go bad, you need to take action immediately to prevent the damage that could occur. You can try testing your breaker by unplugging all electrical components from your home. If your breaker trips immediately, it is likely that it is overloaded, or has become bad.

If a circuit breaker keeps tripping at five amps or 10 amps, you probably have a bad circuit breaker. If this happens, call an electrician or call 911 to find out what is wrong. If you cannot identify the problem, you may want to check the circuit breaker‘s electrical components and wiring. If they don’t appear to be overloaded, you could have faulty fuses, which could be the source of your problem.

Burning Circuitry – If you notice a burning smell, it may be due to overheating wiring in the breaker. If you smell smoke or fire in the room, you should immediately shut off the power. If you can’t figure out what is causing the smell, call an electrician.

How do I know if my circuit breaker is going bad?

The breaker may be malfunctioning due to a number of reasons, including an overloaded circuit. If this happens, it may be a sign of overload, and you should unplug all electrical devices until you have an electrician come out to check the breaker.

What happens when a breaker starts going bad?

If you have a circuit breaker that is constantly tripping, you need to know what to do. Firstly, you need to unplug any electrical devices that are plugged in to the circuit. This will help you to determine what is overloaded. Another option is to reboot the system to see if the problem is fixed. But if you are unable to do this yourself, you can call a professional electrician to fix it for you.

If the circuit breaker is tripping frequently, it is probably overloaded. If this happens, you can reduce the load and this should stop the frequent trips. Otherwise, you may have to replace the circuit breaker. This way, you will be able to avoid electrical shocks and potential fires.

There are many different causes of circuit breakers going bad. One of them is water impurities. These can cause the electricity to track across the surface. You should never touch a circuit breaker that is wet. This poses a shock and fire risk to anyone who comes in contact with it.

How do I test a breaker?

If you suspect that your circuit breaker is not working, you need to know how to test it. You can do this by placing a multimeter on the circuit breaker’s lug terminal and grounding it to the neutral bus and the inbound black wire. If the tester reads over two volts, then it’s defective.

Timing tests can also help you find out whether your circuit breaker is performing properly. These tests measure the speed at which the main contacts travel and analyze if they are synchronized with each other. You can use a circuit breaker analyzer or a simple external signal to initiate the test.

Before you begin testing your circuit breaker, turn off all of the appliances. This is important because some circuit breakers trip when they are overloaded, so you have to test them before you turn them back on.

When should you replace a circuit breaker?

A buzzing noise coming from the circuit breaker is an indication that it needs to be replaced. While it may seem harmless, it may be dangerous. If this sounds like a fire hazard, contact a licensed electrician immediately. Additionally, you should replace the circuit breaker if a new appliance needs more amps than the breaker can handle.

You should check your circuit breaker every 25 to 30 years. If it is older than 30 years, it should be replaced. It is also important to understand electrical wiring so that you avoid miswiring or any other electrical related mistake.

Is it common for a circuit breaker to go bad?

Some of the symptoms of a bad circuit breaker include sparks and burning smells. If you notice either of these symptoms, you should have it checked by a professional electrician. This can be a sign of a burned breaker or an overload problem. To determine whether your breaker is tripping, unplug appliances that are drawing current from it.

Overloaded circuits typically trip later when devices are powered up. They trip because they are attempting to draw more amps than the electrical system can handle. To determine if a circuit is overloaded, unplug all electrical devices and examine the label or sheet on the panel. If the breaker still trips, you need to replace it.

Faulty circuit breakers can also cause power outages. This can be dangerous for anyone working on electrical equipment. You should also check if the breaker trips after you have turned on an electrical device. This is a common sign of an overload.

Circuit breakers are designed to withstand a lot of use. However, if they are not serviced for a long time, they may start to fail. Old circuit breakers show signs of cracking and should be replaced as soon as possible. It is important to replace circuit breakers on a regular basis to ensure a safe and reliable electrical system.

Circuit breakers are designed to protect your home from electric shocks and surges. Whether they are GFCI or AFCI, they should last from 10 to 15 years. However, their life span may be shorter depending on factors like humidity or circuit overload.

Can I replace a circuit breaker myself?

Before you can replace a circuit breaker yourself, you should understand the process in detail. Before you begin, make sure the breaker you’re replacing fits in its socket and does not have any wires dangling out. Also, you need to repair any scorched wires or sheathing. Then, you need to connect the new breaker to the electrical wire. It is important to make sure the new breaker is secured with screws. Lastly, you need to test the voltage of the circuit.

The installation of circuit breakers is a risky endeavor. You may accidentally touch a live electrical wire, which can cause an electric shock or burn. The installation process takes five minutes, but if you do it wrong, you could potentially cause serious injury. In addition, it could negatively affect your homeowner’s insurance. However, if you install the circuit breaker correctly, it should last for years.

It is important to note that you should always consult a licensed electrician before replacing a circuit breaker yourself. Many cities require that you hire a licensed electrician to handle electrical projects. You should also check with your local building and permits office to determine whether you need an electrical permit to replace the breaker.

Is Your Circuit Breaker Too Weak?

If your circuit breaker keeps tripping, there could be several reasons. The circuit may be overloaded, or the breaker may be frayed or loose. Another problem could be a faulty installation. Overload can also be caused by too many items plugged into the same circuit.

If you notice a circuit breaker tripping, it might be a sign that it’s time to replace it. If the breaker is too weak, it could potentially trip without tripping and create a fire risk. If you suspect a faulty circuit breaker, contact a certified electrician immediately.

Whether it’s a mechanical or electronic breaker, you should check its label carefully. A faulty circuit breaker is one that has not reset properly. This is likely because the contacts or connections are too loose. Another cause for a circuit breaker to trip is a short circuit. You should also be aware of any safety procedures when repairing a circuit breaker.

A circuit breaker is a safety device that interrupts electricity when the current reaches a certain limit. This prevents dangerous wire heating. Typically, a circuit breaker will trip when there is a high amount of load on the circuit. Once the load is minimized, you can reset the breaker and restore power. But if it fails to reset, you need to replace the breaker.

Old circuit breakers often show signs of cosmetic deterioration. But when performance starts to decline, they will be a dangerous hazard. Cracks that are too deep can expose the important wires, causing a circuit breaker to fail. If you suspect your breaker is older than ten years, you should call a professional electrician.

What Do I Do If My Circuit Breaker Won’t Reset?

If you’re wondering what to do if your circuit breaker won’t reset, you’re not alone. This is a common problem, and it can easily be solved by flipping the switch. Sometimes, though, the circuit breaker keeps tripping and won’t reset, so it’s important to check to make sure you’re flipping the correct switch. Also, make sure to push the breaker’s handle all the way to the off position.

One way to fix this problem is to call an electrician. An electrician can come out and repair or replace the circuit breaker. If the problem persists, the breaker needs to be replaced. If you don’t know how to replace a breaker, call a licensed residential electrician and ask him to check the problem.

Another common reason for a tripped circuit breaker is a faulty wire. The best way to determine which is the problem is to unplug extra appliances and devices from the circuit. If you can’t find any obvious causes, try moving them to another circuit. You can also check if there is any short circuit in the circuit.

How To Find Circuit Breaker